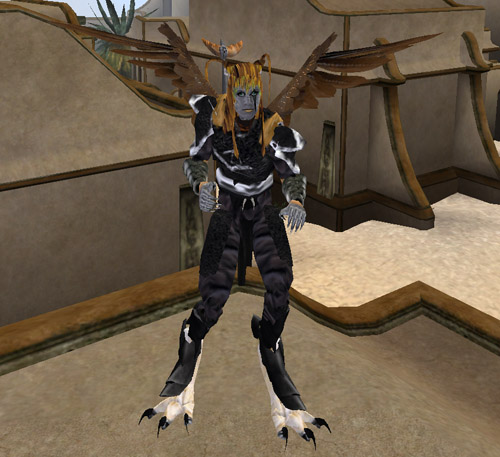 This is the first version of pharlans that I have made. They have the most features, including birthsigns, innate armor and very LARGE numbers of playable heads. They are brightly colored with males having yellow/gold coloration, while females have duller brown/rust bodies with golden highlights. NOW version 4.0 What's changed? Users of Way of the Talon can install this upgrade to see the new textures on the pharlan NPCs.

You can also swap to an alternative *scripted* gameplay style via a set of console commands. This style reduces the normal weapons weakness to 50% Removes the spell absorbption and Gives immunity to poison and ice. A script Heals and restores magic when hit by fire or electricity

To try this type this into the console:

More screenshots of Standard and other Pharlans (These have not been updated yet!)


Don't forget to check out the Pharlan addons

About better bodies in these mods:
There will be some clipping with original Bethesda clothes and armor - but it is fairly minimal. There's also some clipping around the elbows and ankles but it is not too noticable. Female better bodies UPPER clothing will not work for female pharlans since they do not have breasts. Both sexes can wear any better bodies clothing for the lower body -loin cloths etc. Pharlan specific clothing is in the works and will be included in a separate mod.

Pharlans in Morrowind are designed to be fairly balanced and fun to play. Pharlans are given several bonuses inlcuding a 5X magicka bonus(I always felt morrowind never gave you enough magicka), a no cost flying spell, detect creatures and night eye constant effect (not ridiculously powerful) and a 70% spell absorbtion. They are balanced by a 100% weakness to normal weapons as well as stunted magicka. However you are also given a no cost magicka absorption spell. This makes every living thing a magicka source (this is why you have a detect creatures spell). You also start with 15 fewer stat points than other races. You'll definitely feel the normal weapons weakness-especially early on. You also get a nice fast flight spell which always succeeds but costs 300 magicka. Even a level 1 pharlan can cast it once. Any more than that and you have to recharge. The nice thing is you can cover 1/2 to 1/4 of the main island with a single cast. No more walking forever to get somewhere.

To the main Morrowind Mods page
To my Homepage